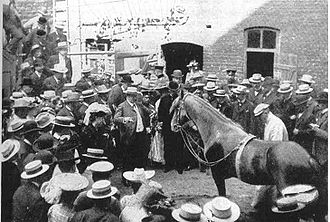 Meet ‘Clever Hans’: A horse that performed arithmetic and intellectual tasks on the level of a third-grader.

“He can do almost everything but talk,” reported the New York Times in 1911.

In his book ‘Subliminal,’ theoretical physicist Leonard Mlodinow explains how:

Hans learned to respond to his master’s questions by stamping his right hoof. The New York Times reporter described how, on one occasion, Hans was told to stamp once for gold, twice for silver, and three times for copper, and then correctly identified coins made from those metals. He identified colored hats in an analogous manner. Using the sign language of hoof taps, he could also tell time; identify the month and the day of the week; indicate the number of 4’s in 8, 16, and 32; add 5 and 9; and even indicate the remainder when 7 was divided by 3. Sometimes, he could answer his master’s questions even if not verbalized. By the time the reporter witnessed this display, Hans had become a celebrity.

A psychologist named Oskar Pfungst decided to investigate. He discovered that the horse could answer questions posed by people other than his master, but only if the questioners knew the answer, and only if they were visible to Hans during the hoof tapping.

Pfungst eventually found that the key to the horse’s feats lay in involuntary and unconscious cues displayed by the questioner. As soon as a problem was posed, the questioner would involuntarily and almost imperceptibly bend forward, which prompted Hans to begin tapping. Then, as the correct answer was reached, another slight bit of body language would signal Hans to stop.

Scientists, Mlodinow ads, attach great importance to the human capacity for spoken language. But we also have a parallel track of nonverbal communication, and those messages may reveal more than our carefully chosen words and sometimes be at odds with them. Nonverbal communication forms a social language that is in many ways richer and more fundamental that our words.

One recent study, for example, found that when trained properly, a wolf can respond to human nonverbal signals. Like us, wolves are highly social animals, and one reason they can respond to nonverbal cues from humans is that they have a rich repertoire of such signals within their own community.

In ‘The Expression of the Emotions in Man and Animals,’ Charles Darwin argued that emotions — and the ways they are expressed — are not unique to humans and provide a survival advantage.

Consider, for example, a smile — an expression we share with other primates. If a submissive monkey wants to check out a dominant one, it will bare its teeth as a peace signal.

“In monkey talk, says Mlodinow, “bared teeth mean I don’t plan to attack, so please don’t attack me first. In chimpanzees, the smile can go the other way — a dominant individual may smile at the submissive one, saying, don’t worry, I’m not going to attack you.”

You might think a smile is a rather shoddy barometer of true feelings. After all, anyone can fake one. But our facial expressions are expressed subliminally by muscles over which we have no conscious control. Our real emotions and signal expressions cannot be faked.

A genuine smile involves contraction of specific muscles which pull the skin surrounding the eye toward the eyeball causing an effect that looks like crow’s-feet but can be very subtle.

Learning to read these subtle cues is fundamental to social interaction and the development of empathy: the cornerstone of emotional intelligence.

There is a road from the eye to the heart that does not go through the intellect. — G.K. Chesterton

In ‘Figuring,’ a sublime book by Maria Popova, she explains that the word empathy came into popular use in the early twentieth century through the gateway of art, to describe the imaginative act of projecting oneself into a painting in an effort to understand why art moves us.

But if we don’t expose ourselves to a painting, we cannot project our emotions onto the canvas and intuit the subtlety of the artist’s intention and resulting effect in our feeling bodies.

Likewise, now that our social interactions are increasingly mediated by social media and text messages, our capacity to read subtle cues broadcast by body language, tone of voice, and facial expressions is atrophying. An emoticon, no matter how clever or cute, just doesn’t cut it, which might explain the growing level of societal discord and strife.

Just think of the last time one of your text messages was completely misunderstood by its recipient.

While this modern-day scourge affects both old and young alike, my current work and concern is with our boys.

Much like shielding boys from danger inhibits their ability to effectively overcome obstacles and navigate the world, allowing them to mediate their human interactions through technology prevents them from developing strong social-emotional intelligence.

Also known as expressive agnosia, social-emotional agnosia is the inability to perceive facial expressions, body language, and voice intonation in social situations. People with this form of agnosia have difficulty determining and identifying the motivational and emotional significance of external social events. In other words, they can’t relate. Social-emotional agnosia often occurs in individuals with schizophrenia and autism.

The Centers for Disease Control and Prevention estimates that 1 in 68 children in the U.S. have autism. The prevalence is 1 in 42 for boys and 1 in 189 for girls. These rates yield a gender ratio of about five boys for every girl. The latest estimate of autism prevalence is up 30 percent from the rate reported in 2008, and more than double the rate in 2000. — Scientific American.

Children’s social skills may be declining as they have less time for face-to-face interaction due to their increased use of digital media, according to a UCLA study.

UCLA scientists found that sixth-graders who went five days without glancing at a smartphone, television or other digital screen did substantially better at reading human emotions than sixth-graders from the same school who continued to spend hours each day looking at their electronic devices.

Another UCLA study linked technology with a decline in critical thinking and analysis.

As I explain to boys in Chapter 2 of my current book, our male brains are wired to transmit our emotions more quickly to our physical bodies. As a result, we are more impulsive. We act quickly to solve immediate problems. We express our emotions by moving; we hit a desk when angry or run when stressed. That’s the reason men express love with less words and more physical action. We are also less empathetic than females… less sensitive to other people’s feelings, pain, and suffering.

The only way Clever Hans was able to answer questions was while being face-to-face with the questioner.

The only way boys will develop positive social skills is by removing the screens which shield them from direct human interaction and send them out into the world.

This, no doubt, will help them become as emotionally-intelligent as a horse.

Learn about the rewards you’ll receive when supporting the publication of ‘The Hero in You.’