Things are not working out. This shit’s too hard. I’m giving up. The odds are stacked against me. Life’s not fair…

Writing ‘The Hero in You’ is beginning to feel like a conversation with myself. I now understand what Ursula Le Gwinn meant when saying that storytelling is a tool for knowing who we are and what we want.

More than a conversation unspooling in story, it’s like an extended, revelatory life-coaching session; like having a one-on-one with Obi Wan Kenobi, the legendary Jedi Master in ‘Star Wars’ training young Luke Skywalker in the ways of the Force.

It doesn’t feel like a book for just boys anymore but one with the potential to transform the lives of men and women; young and old alike. It’s certainly changing the life of an aspiring writer fast approaching sixty.

I began the book four months ago. With still no income in sight, a small pension claimed by old debts, and credit cards maxing-out, it felt like one more reckless decision. Irresponsible! Especially in light of the slew of rejections to my Memoir assailing my inbox like a storm of jagged hailstones. After two years with little to show, starting another project seemed as futile as plowing the sea.

“How about a ‘real’ job, Dad?” my daughters counseled.

I was smack inside the Inmost Cave; the edge between life and death found on every hero’s journey; the darkest hour where the hero must face his greatest fears. Think of Dorothy walking into Oz’ throne-room and facing the giant head of an angry old man surrounded by flames, smoke, and thunder; where the mighty Wizard says he’s prepared to grant Dorothy her wish but imposes seemingly impossible tests in hopes that she will desist.

I keep reminding myself I’ve been in worse financial situations before, and still here, now doing what I believe I was meant to all my life.

If this is not a real job, why does it feel so right?

J.K. Rowling was unemployed, divorced and raising a daughter on social security while writing the first Harry Potter novel. After Sidney Poitier’s first audition, the casting director instructed him to just stop wasting everyone’s time and “go be a dishwasher or something.” Poitier went on to win an Academy Award.

Sometimes in life, situations develop that only the half-crazy can get out of. — French philosopher La Rochefoucauld.

In a way, I am still inside the cave, quivering with my greatest fears: losing face with those I love — my two daughters and my partner — and the fear of a final deathblow to my lifelong dream of becoming an author stirring uncertainty of what I’d do if I fail. Add to the mix the fear of reaching the end of my life without meaningful impact…I do not want to be someone who ends up simply having visited the world.

More like first-world laments I’ve realized as I sift through hundreds of stories of real-life heroes for my book and finding astounding examples of ordinary people who turned much bitter ones into lemonade.

Some, literally, like Alexandra Scott who two days before her first birthday was diagnosed with cancer. When she was four, having just finished receiving experimental treatment at Connecticut’s Medical Center, she told her parents she wanted to set up a lemonade stand and give the money she raised to her doctors. That first stand raised $2,000.

In the next four years, inspiring hundreds of supporters who set up lemonade stands throughout the country, ‘Alex’ raised a total of $1 million for childhood cancer research. She died at the age of eight, yet her cause lives on through the Alex’s Lemonade Stand Foundation.

I then discovered William Kamkwamba, the African boy who harnessed the wind to save his family and village from starvation.

William was born in Malawi, Africa. He was the only boy among six girls in his family living in a mud and brick shack with no electricity. He was a simple farmer in a country of poor farmers.

When William was 14, his country experienced a terrible drought. Within five months, all Malawians were starving to death. William’s family ate one meal per day. His father could not continue paying for his education so William dropped out of school.

“It was a future I could not accept,” William said.

Hungry all the time, with little education, poor English, and no computer or access to the internet, William spent months inside a rickety library pouring through outdated magazines and books learning all he could about physics and electricity. He dreamed of building a windmill to power a pump which would draw water from a well to irrigate their fields. 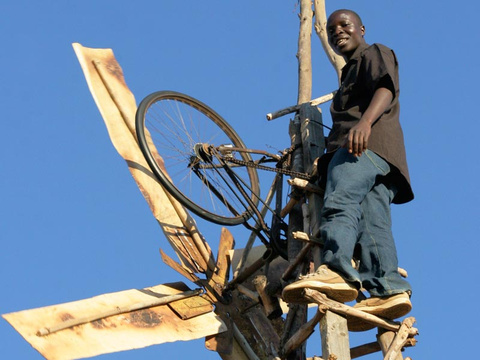 Armed with that knowledge, William scavenged through a nearby junkyard and finally convinced his father to surrender his only bicycle whose frame was needed to build the contraption. William eventually erected his windmill and saved the day.

What about Toyotomi Hideyoshi, a frail and poor farming boy in 14th Century Japan?

Hideyoshi was short (about five feet tall), weighed 110 pounds, had stooped shoulders, was butt ugly and unathletic. His oversize ears, oversize head, sunken eyes, tiny body, and red, wrinkled face gave him an ape-like appearance resulting in most everyone calling him “monkey” throughout his life.

This “monkey” squeezed all the daunting lemons of his physical ‘limitations’ and ‘disadvantaged’ beginnings into practical wisdom which ultimately put an end to Japan’s Age of the Warring States and made him supreme leader!

Alexandra Scott, William Kamkwamba, and Hideyoshi are among the real-life heroes featured in my book as examples to young boys who might feel overwhelmed by seemingly insurmountable odds to do something meaningful with their lives. I reassure them they do not need superpowers to break through the prison of their limitations. I then guide them — like Obi Wan — to tap the Life Forces they already possess to write their own hero story. It doesn’t have to be something extraordinary, I tell them…

“Helping a blind man cross the street because you have the power of vision is a heroic act. Helping a friend with his math homework because you’re good with numbers is the act of a hero. Cooking dinner for the homeless in your neighborhood because you love to cook is heroic. If you make just one positive difference, you’re a hero.”

My extensive research has also led me to author Ngugi Wa Thiong’o, someone much closer to my — and every writer’s experience.

In his late thirties, armed police dragged Ngugi from his home and jailed him in Kenya’s Kamĩtĩ Maximum Security Prison for having written a play critical of the government. While in prison, he wrote ‘Devil on the Cross’ on toilet paper.

“The paper we were given was not the soft kind we find on television,” he says. “It was a bit hard, a bit rough, so to speak, but very good writing material. It held the pen very well.”

A recipient of the Nonino International Prize for his work, Ngugi has also been nominated several times for the Nobel Prize in literature. As for that elusive prize, Ngugi says he is more interested in what he calls “the Nobel of the Heart.”

If Ngugi was capable of squeezing such nasty lemons onto toilet paper and inspire the world with his noble work, what’s my excuse?

In Spanish (my mother tongue) we have a word for such work:

‘Ofrenda’ is work offered in gratitude, love, and service to others; work dedicated to a noble cause. That’s how I consider my work on The Hero in You.

Rightly shamed by all these ordinary heroes, I am done with my first-world laments!

While still in the cave, like Dorothy, I will defy my fears and will not desist. I will see this to the end.

Failure is an option, fear is not. — James Cameron

When overwhelmed by the stacks of books and publications I must research, I attack them with a Warrior’s sword and a Lover’s heart. I remind myself that, while strapped for cash, I have found purposeful work; that sweet spot Aristotle said is found at the intersection of one’s talents and the needs of the world. Further, I am loved and am loved in return by three extraordinary women. I possess the wealth of kings. I ask for no more.

Finally, I’m committed to help as many young boys enter the path of authentic, generative manhood and won’t let them down. I consider this cause to be of supreme importance to the world.

Will my book be a hit? Will it make me money? Will I be famous? Wrong questions.

If I can stop one Heart from breaking

I shall not live in vain

If I can ease one Life the Aching

Or cool one Pain

Or help one fainting Robin

Unto his Nest again

I shall not live in Vain. — Emily Dickinson

“No difficulty can discourage, no obstacle dismay, no trouble dishearten the man who has acquired the art of being alive,” wrote Ella Wheeler Wilcox. “Difficulties are but dares of fate, obstacles but hurdles to try his skill, troubles but bitter tonics to give him strength; and he rises higher and looms greater after each encounter with adversity.”

Sweet are the fruits of adversity. — William Shakespeare

From now on, I promise to spare you my first-world laments and let my book inspire you.

Whether you support its cause or don’t, I am rewarded by believing its footprint will guide you on your own hero’s journey.

Inspired already? Then be a hero. Champion the book! CLICK HERE.

Read the book’s version of lemons and lemonade.